Eva Mendes declares in a new interview that she will never, ever marry. In fact, she can’t imagine anything less appealing. What’s up with that? 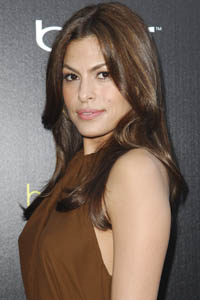 No such luck for all the guys who hoped they might one day be lucky enough to marry knock-out actress Eva Mendes. She says she’s never going to get married. Ever.

“I’m not, like, anti-marriage,” Mendes told host Chelsea Handler on Chelsea Lately last night, “or the institution, like, for other people, but I just think, you know? And I love the idea of a union. That’s all very beautiful. But I just think, you know, it’s a very old-fashioned, archaic kind of thing. I mean, we did it for land, originally. How unromantic is that?”

Mendes goes on to say that “husband” and “wife” are “very unsexy words,” and announces that she’d rather end up old and gray with someone who she can refer to as her “boyfriend,” not her husband.

“It’s so not about what it should be about,” Mendes adds about marriage, pointing to over-the-top weddings and wedding-oriented reality TV shows as part of the problem.

It sounds like the 37-year-old Training Day and Bad Lieutenant: Port of Call New Orleans star never has to worry about becoming a bridezilla — or getting a divorce, for that matter.

As far as who never has a chance to put a ring on it, Mendes has been dating Peruvian filmmaker and producer George Gargurevich for nearly a decade without tying the knot.

What do you think of Eva’s anti-marriage attitude?