Don Draper is heading behind the scenes. Jon Hamm, who portrays the character on AMC’s Mad Men, is about to make his directorial debut. The actor has signed on to direct the (highly anticipated) premiere episode of season five! 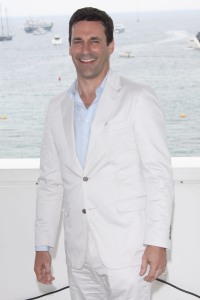 Jon Hamm is taking a cue from his Mad Men co-star John Slattery (Roger Sterling) who directed a few episodes of the show in season four. “I watched Slattery do it, and he handled it with such grace and ability and ease,” he said, before adding a laugh, “I figured if he can do it, (expletive), I can do it too.”

Directing has always been on Hamm’s mind and when the opportunity presented itself — he took it!

The long delayed fifth season is scheduled to begin production in August but Hamm plans on getting a head start before everyone else. He has a lot on his plate. Not only is he directing the first episode of the season but it’s the first time he’s directed anything — ever!

Jon Hamm is on a roll. He currently appears in the box office hit Bridesmaids and he produces and stars in the upcoming film Friends with Kids.

As for Mad Men, season five will debut in March 2012. We know it’s a long wait but we’re sure it will be worth it. We don’t know if you’ve heard but Jon Hamm’s directing it.