Elton John and his partner David Furnish are the first gay couple to be nominated as Celebrity Dads of the Year.

Elton John and David Furnish became fathers on Christmas Day of 2010 to baby Zachary — and are “thrilled” to be nominated as Celebrity Dads of the Year. The couple had a baby through a surrogate mother, using Elton’s sperm and a donated egg from an unknown donor. 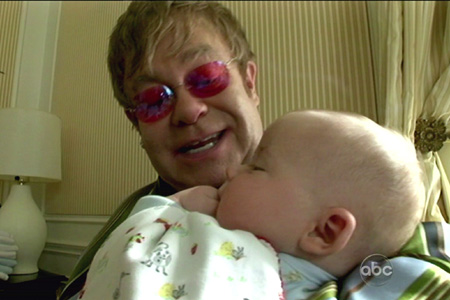 The Premier Inn Celebrity Dad of the Year 2011 award organizers said their aim was to “reward the celebrity dad who has impressed the nation by balancing a hectic public life with the demands of parenting.”

“I knew I’d feel joy but it was the most relaxing thing that’s ever happened to me,” 63-year-old Elton told ABC News.

There are rumors that Elton and David spent $4 million on Zachary’s nursery, but Elton insists they don’t want to spoil him. “The worst thing you can do to a child, and I’ve seen it happen so many times, is the silver spoon,” he said. “Being the child of a famous person is very difficult and we’re very well aware of the pitfalls of that.”

David agrees, saying, “Our life might be very luxurious but it’s all come from hard work. Both Elton and I have sort of earned everything we’ve done in our careers and furthered our educations through our own drive and our own ambitions and we want Zachary to be exactly the same sort of way.”