The Hangover: Part 2 is raking in the dough at theaters. The movie earned $10 million from midnight showings on Wednesday and $31.7 million on Thursday. It’s breaking records left and right and is on track for a huge blockbuster weekend.

Phil, Alan, Stu and Doug beat Carrie and the rest of the ladies from 2010’s Sex and the City 2, which currently holds the record for the biggest opening for an R-rated comedy. But Todd Phillips’ film is nipping at their Manolo Blahnik heels. Not only does The Hangover: Part 2 have the third highest gross of all-time (for Thursday) but it also has the best start for an R-rated comedy ever. 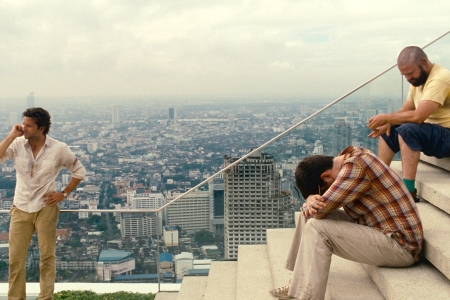 The Hangover: Part 2 is doing great at the moment but it still needs to fight off the competition. Its biggest threat is another highly anticipated sequel — Kung Fu Panda 2. With Memorial Day upon us, kids will be free from school, which means the animated feature could get a leg up on the competition.

Kung Fu Panda 2 earned a mere $5.8 million on Thursday, but its box office impact was affected by classes being in session. Tuesday we’ll see who the real champions are. Will audiences go for a group of hungover guys and a monkey or a panda and his crime-fighting buddies? Decisions, decisions.

Check out our interview with the guys from The Hangover: Part 2 >>