Jerry Maguire star Jonathan Lipnicki had to get a restraining order against an ex-girlfriend. Read on to find out what she did!

Want to feel old? Consider this: Jerry Maguire “the human head weighs eight pounds” actor Jonathan Lipnicki is 20. He’s even old enough to have dating problems — he had to get a restraining order against his ex-girlfriend. 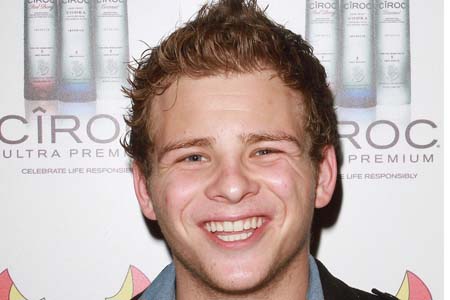 Lipnicki alleges that ex Amber Watson came to his bedroom on May 14 and threatened to kill him.

“When I tried to get up, she tried to pin me to my bed. I had to move her off me physically… she threatened to annihilate me,” Lipnicki said in court documents.

The actor was granted a restraining order from the petite actress on May 16 and she’s been ordered to stay at least 100 yards from the actor and his dog.

That got us thinking: Is Lipnicki still an actor? Apparently so! He just completed a role as an understudy in the Broadway production The Lieutenant of Inishmore. He’s also attending acting lessons at Playhouse West and competes in Brazilian Jiu Jitsu. He fits all of that in when he’s not fighting off crazy ex-girlfriends.

We have to admit — we preferred Lipnicki as a tyke alongside Tom Cruise and Renee Zellweger. He’s still cute-ish, but we have that image of an eight-year-old in our heads, so it’s weird to see him as an adult.