Get ready to train your celebrity bump watching skills back on Jennifer Garner. Judging by recent photos, it looks like Ben Affleck’s wife might be pregnant. That’s baby number three! 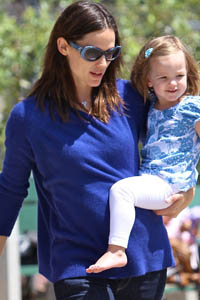 Is Jennifer Garner pregnant or is she not? Sure, rumors are always flying about celebrities like Garner and her husband, Ben Affleck, wondering whether or not they’re pregnant, but recent photos of Garner suggest Mrs. Affleck could be getting ready to bring a third little Affleck into the world.

It’s not easy to tell because Garner, 39, is most often seen away from the red carpet, dressed casually in jeans and loose shirts while playing with daughters Violet, 5, and Seraphina, 2. Still, some new pics of the Alias actress at the playground reveal a very possible baby bump.

That could mean the couple is preparing for a third child with their sixth anniversary right around the corner next month.

Since Affleck seems like a man’s man, it could be they’re trying for another in hopes of a boy. Or, if they have a girl, that will make three daughters for the couple, leaving Ben the odd man out yet again.

It’s possible all the public scrutiny of Garner’s tummy is focused on a slight weight gain, but the place where the bump is located looks like a baby may be in there instead. In fact, right now, Garner’s body looks a lot like Carla Bruni‘s, who is rumored to be in the early stages of a pregnancy herself.

You can tell it’s springtime when celebrity pregnancy stories start popping up everywhere.

Do you think Jen Garner is preggers?