Kung Fu Panda 2 arrives in time for the holiday weekend and to say it sets off fireworks is an understatement. The first Kung Fu Panda delighted families and individuals alike with Jack Black’s terrific performance anchoring a delightful film that also starred Angelina Jolie, Dustin Hoffman, Seth Rogen and Lucy Liu. Now, Po and his furious five are back in Kung Fu Panda 2 and the results are riveting.

The Kung Fu Panda cast is back in Kung Fu Panda 2 with a few notable additions including a perfectly played Gary Oldman, Dennis Haysbert and Jean Claude Van Damme. Yes, we said it. 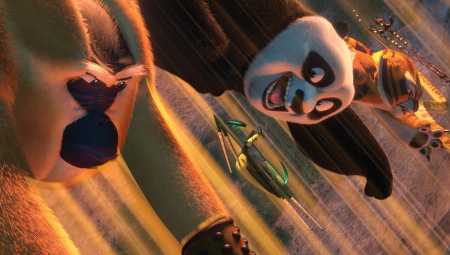 Yet, the anchor and what makes the Kung Fu Panda franchise so delicious is Jack Black as Po. Black is his usual hybrid self of confidence and uncanny silliness that has endeared his character to millions of children. It’s impossible to imagine anyone else being able to channel their inner Panda as Black achieves.

Kung Fu Panda 2 finds Po and his kung fu fighting friends set to do battle against the evil Lord Shen (Oldman). Lord Shen has channeled the power of a new technology — fireworks — and he’s developed a weapon that will allow him to rule the world and make kung fu obsolete. Po and his team must fight the evil menace in order to preserve peace across China.

With any sequel, whether it’s live action or animated, the power, emotion, action and performances must all bring it up a notch. Kung Fu Panda 2 accepts that mission and handles it with perfection. As is the case with DreamWorks animation, the colors pop off the screen and in 3D, the film proves even more powerful than the first. That is a rare situation, where a sequel not only stands up to the original, but surpasses it. 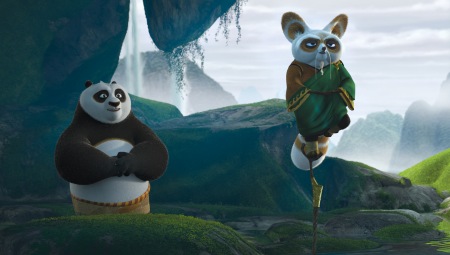 Humor is never lost on the story, mostly achieved by Black, but also his supporting cast such as Seth Rogen (Mantis) and even Dustin Hoffman’s Shifu. But, we would be remiss to not salute the actor who portrays Po’s adoptive father, James Hong as Mr. Ping. He leaps into his role with a full force of all-out funny.

The role of adoption is handled with grace in the Kung Fu Panda sequel. As Angelina Jolie (Tigress) told us at Kung Fu Panda 2’s premiere, the storyline hits home and it’s a chance to show how adoption is an incredibly positive experience that enhances the lives of not only the children, but their adoptive parents. In Kung Fu Panda 2, audiences are taken further into the story to discover how Po came to be adopted by Mr. Ping. Po goes through a crisis that threatens his power as a kung fu master when he learns of his origins. With more and more families exploring the adoption option for starting a family, the timeliness and resonance of its part of the Kung Fu Panda 2 plot is priceless.