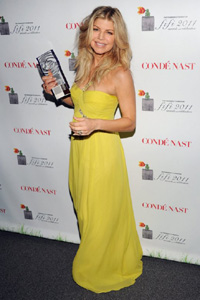 According to the FiFi Awards, Fergie is the best smelling celebrity! The Black Eyed Peas singer and her husband Josh Duhamel attended the 2011 FiFi Awards at the Lincoln Center on May 25th to pick up the award for the best celebrity fragrance of the year. Fergie looked great in a beautiful yellow BCBG Max Azria dress.

Outspoken, which is one of the best-selling fragrances from Avon, has a floral scent with notes of tuberose, iced berry and leather. Fergie is also working on a second fragrance, called Outspoken Intense, which has notes of kumquat.

“My dad grew them. He taught me how to peel them. They’re very, very small,” she says, talking about her childhood in Southern California.

Fergie confessed her favorite perfume growing up was the men’s cologne Drakkar Noir because an ex-boyfriend used to wear it!

Other celebrities that won awards for their perfumes included Halle Berry for Pure Orchid and Mary J. Blige for Carol’s Daughter.

“The celebrity category in fragrance is no longer an ‘add on’ as it was once considered, never knowing if it would last or not. Today, it is a major segment of fragrance marketing and our hope is that the celebrities, who chose to have a fragrance or endorse one, take it as seriously as their latest album, film or book by supporting it in the same way,” said president Rochelle Bloom.

Tell us: What is your favorite celebrity scent?