The fifth poster for Harry Potter and the Deathly Hallows Part 2, the final (sniff) film in the series, has been released. It features the scariest shot of ”he who must not be named” yet. Wait… if Harry can say it, so can I! It’s Voldemort! 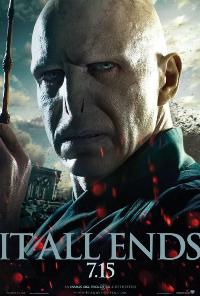 I’m still not willing to accept that the beloved Harry Potter franchise is almost over with the arrival of Harry Potter and the Deathly Hallows Part 2. But… well, it’s going to go out with a bang. When we chatted with director David Yates last year in London, he called the second part an action movie. I think that might be an understatement. Those trailers look incredible!

We’ve finally got the Voldemort poster from the final film and it’s terrifying. It’s a close-up shot of his face with bits of fire raining down and Hogwarts tilting in the background. Shudder.

So, are you guys doing anything special for the finale? Harry Potter parties? Wearing your Gryffindor scarf? Weeping in a corner? And what do you think will replace this franchise in the movie world? Let us know below.

Harry Potter and the Deathly Hallows Part 2 will hit theaters on July 15th, 2011.