Troubled British singer Amy Winehouse is back in rehab — and drank a bottle of vodka on her way to the clinic! 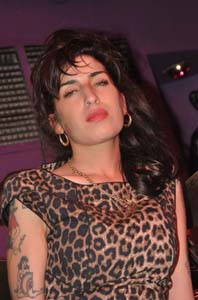 Where has Amy Winehouse been? Not recording any new music, and apparently not getting her act together. Nope, sounds like the talented-yet-troubled singer has been busy boozing it up — so hard that her family has shipped her off to rehab again.

Winehouse “has embarked on a treatment program at the Priory Clinic,” the Rehab singer’s rep said in a press statement. “She wants to be ready for performances in Europe this summer and decided to seek an assessment. She will remain at the Priory on doctors’ advice.”

Never one to waste an opportunity, Winehouse passed the time during her ride to the clinic downing a bottle of vodka!

A customer at the local liquor store told The Sun, “She seemed out of it. She was stumbling about, slurring her words.”

What rock has that guy been living under? That’s pretty much the least shocking thing one would expect to see Amy Winehouse doing.

The Priory, where Winehouse is receiving treatment, has had its share of notorious patients including Kate Moss and Ronnie Wood.