American Idol runner-up Lauren Alaina told Jay Leno and a special guest that not everyone wanted the talented teen on their show — who rejected her? 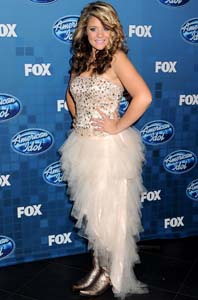 Who would reject a talent like Lauren Alaina? The American Idol runner-up appeared on The Tonight Show with Jay Leno last night and took the opportunity to take another guest to task for rejecting her. Who was it?

None other than Piers Morgan, host of America’s Got Talent!

Turns out Lauren Alaina tried out for America’s Got Talent twice — and was flatly rejected both times!

The revelation came when Morgan told Alaina he thought she was the better singer of the final two contestants on American Idol.

“Do you wanna hear something funny?” Alaina asked Morgan. “I tried out for your show and I didn’t make it.”

Watch what happens next!

We think despite that rejection, Miss Lauren Alaina will do just fine!