Jimmy Fallon strapped on his guitar and partied in the U.S.A during his latest Neil Young impression.

We’ve seen Jimmy Fallon pull off some epic impressions, but his Neil Young effort is pretty spectacular. If you’ve never seen Jimmy Fallon don a wing and hat while taking on songs in the key of Neil Young — you’re in for a treat with the video we’ve got for you. Keep in mind, they’re not songs you’d ever think would come out of Young’s mouth. 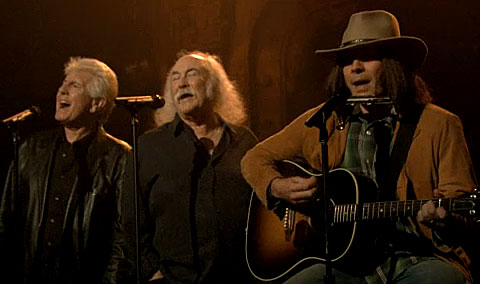 During Wednesday’s (May 25) episode of Late Night with Jimmy Fallon, the host broke out his Neil Young impression and treated us to his version of Miley Cyrus‘ Party in the U.S.A. We know what you’re thinking — nope, didn’t happen. Oh, it did.

It’s hysterical watching a grown man dressed as Neil Young sing about stilettos but when he’s joined by David Crosby and Graham Nash, two of Young’s former band mates, it’s just too much. Having Crosby and Nash join Fallon was almost as funny as the time Bruce Springsteen backed him on Whip My Hair — almost.

This isn’t Jimmy Fallon’s first rodeo as Neil Young. He’s actually gotten to be a master at it, taking on songs like The Fresh Prince of Bel Air theme and Pants on the Ground.

Check out this stellar video and tell us what you think of Jimmy Fallon’s impression of Neil Young singing Miley Cyrus‘ Party in the U.S.A.