Web Therapy actress Lisa Kudrow has been tapped to host the 15th Annual Webby Awards on June 13th in the Hammerstein Ballroom in New York City. 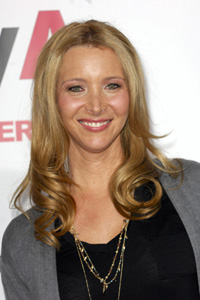 Former Friends actress Lisa Kudrow will be the host of the 15th Annual Webby Awards that will broadcast live on the Webby Awards Facebook page on June 13th.

The Web Therapy star’s main job is to make sure the winners do not go over their five-word acceptance-speech limit! That should be interesting, especially with the likes of Steve Carell and Zach Galifianakis picking up awards this year.

Past winners include Stephen Colbert, who said: “Me, me, me, me, me!” The New York Times won in 2008 in the Newspaper category and said, “Eliot Spitzer, we thank you.”

In fact, Kudrow will be picking up some of her own Webby awards, including her second for Best Comedy: Long Form and Best Individual Performance in an Online Video for Web Therapy.

“Lisa Kudrow has really embraced online entertainment, using her iconic style and sense of humor to create Web Therapy, one of the funniest web series today. She is the natural choice to host this year’s Webby Awards, having been recognized by the Academy for her outstanding role as internet-based therapist Fiona Wallice, creating a whole new character to love for years to come,” David-Michel Davies, executive director of the International Academy of Digital Arts and Sciences (IADAS), said in a statement.