Millions of households tuned in to see the finale of The Oprah Winfrey Show yesterday. In fact, it was her highest rated episode since 1994! 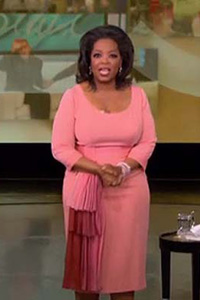 Oprah fans tuned in yesterday in droves to say goodbye to The Oprah Winfrey Show after 25 years. After much anticipation as to whom the final guest would be, it was only fitting that it was Oprah herself that was the final guest.

In her final hour, she reflected on lessons learned, people who made a difference in her life and shows that she hoped would change lives.

The preliminary numbers for the final Oprah show earned a 13.3 rating, and they are estimating around 18 million viewers watched the show. To compare, her normal ratings averaged a 5.5. The national figures for the show will be available in two weeks.

The last time Oprah earned these kinds of ratings was back in 1994, when she aired a show called People Shed Their Disguises.

The Oprah finale was three days long, with Monday and Tuesday being her Oprah Farewell Spectacular, which was a star-studded event. Wednesday, May 25, was the final day of The Oprah Winfrey Show.

Advertisers must have known the final show would draw big ratings, as they were paying $1 million for a 30-second ad!