Snubbed American Idol winner Lee DeWyze is setting the record straight on his supposed refusal to give Scotty McCreery a trophy at last night’s finale. What’s really going on?

Lee DeWyze is finally speaking out about the rumors surrounding American Idol producer Nigel Lythgoe’s claim that he refused to hand out the trophy to Scotty McCreery. 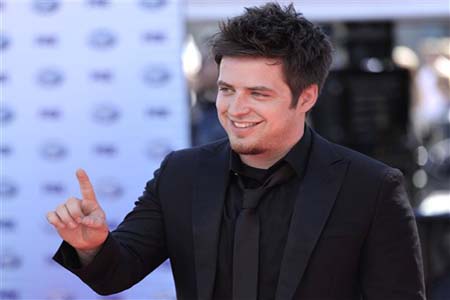 “I was so upset Lee DeWyze wouldn’t present the winners trophy to Scotty. Especially as he’d been on the show this Season. I guess he was shy,” Lythgoe tweeted Thursday morning.

DeWyze said that’s not what happened at all.

“Just for the record… I was not asked to be involved in the Finale. It wasn’t until about 2 minutes before they announced that Nigel had approached me and asked if he could ‘borrow’ me for a second. I didnt feel a last second jump on stage was appropriate. It was Scotty’s moment,” DeWyze tweeted.

“I appreciate American Idol, and the opportunity it has given me. And the people who have made that show possible. I am not angry, or bitter etc. It was an amazing Finale, and I would have loved to be a part of it. I just wasn’t asked. Good luck to all the Contestants and stay true to yourself.”

DeWyze is so diplomatic about the snub — we wonder if his brother will have anything to say about it on Twitter? We’re hoping so.

What do you think: Do you believe Lee DeWyze or Nigel Lythgoe?