Fresh off of his American Idol win, Scotty McCreery nabs the number one spot on iTunes with his country ballad, while Lauren Alaina takes the second spot for digital downloads. 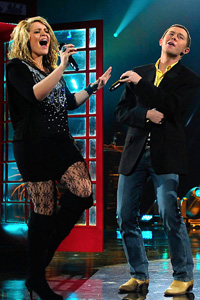 American Idol champ Scotty McCreery kicks Adele’s Rolling in the Deep off of the number one spot on iTunes on Thursday with his country song, I Love You This Big. In fact, the 17-year-old is not only on top of the iTunes chart, but also tops the Country iTunes chart.

This isn’t the first time that country music fans have embraced American Idol alums. Country music superstar Carrie Underwood is the top earner of all past American Idol contestants, having just taken that title from Kelly Clarkson.

“I am really looking forward to getting my music out there,” McCreery said. “I think it’s going to be a great album. I’ve got to pick some good songs. That’s what it’s all about after the show — good songs. The fans have got me where I am right now, but now I have to get out the music they want to hear.”

For those that will miss their weekly dose of live performances from Scotty McCreery, he said that he hopes to perform next month at the Country Music Association Festival in Nashville.

Watch Scotty McCreery perform I Love You This Big: