Should you ever get the chance to bunk at Paula Abdul’s house, beware of what you eat. This lesson Kara DioGuardi had to learn the hard way, after wolfing down six very special brownies and ending up in the hospital! 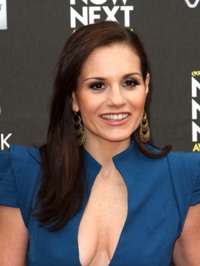 Former American Idol judge Kara DioGuardi was staying at Paula Abdul’s Los Angeles home when a hankering for some chocolate landed her in the hospital. The highlarious incident happened when Paula was on vacation and let Kara stay in her home, long before the pair shared the judges’ table.

Kara DioGuardi spilled the details of the magic brownie drama on Lopez Tonight saying, “The maid at the time found some brownies in the freezer and put them in the refrigerator.” A ravished Kara discovered the treats, not knowing they were baked with a special ingredient, and popped six of the bite-sized brownies in her mouth.

“Six hours later I was like, ‘Heyyy… What’s going on?'” Kara recalls. “I fell out of bed, on the floor… and the ambulance comes, and this guy is like, ‘This [expletive] is high as a kite!'”

The diagnosis was news to Kara. “High as a kite? I was like, ‘I don’t even smoke pot!'” Speaking of Paula Abdul, Kara was sure to clarify, “They weren’t even hers. Someone had left them from a party.”

Kara DioGuardi went on to tell host George Lopez that no songwriting work was accomplished on her brownie binge, but that she was inebriated during the creation of one of her favorite songs — Sober.

Kara and co-writer Pink were “totally drunk” during the writing of the anti-party anthem. “Pink? Man, she is fun and one of the best singers. She’s the best out there.”