Lindsay Lohan surrendered herself to authorities this morning to begin her sentence in her probation violation/necklace theft case. 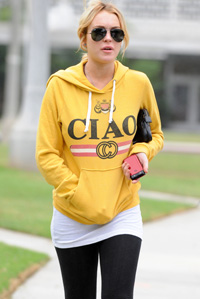 Lindsay Lohan is doing hard time — LOL, just kidding. The actress is doing time, but there’s nothing hard about it. Lohan turned herself in to authorities this morning to begin her sentence in her probation violation and necklace theft case, and her “jail cell” is nicer than many people’s apartments.

Lohan will serve her time under house arrest, meaning she gets to sit in her beach-front Venice, California townhouse listening to the waves roll in and out, eating home-cooked meals, watching cable and entertaining friends — including ex-girlfriend Samantha Ronson who lives right next door.

The actress, who Stephen King thinks would be great for a Carrie remake, was fitted for her old friend, the electronic ankle bracelet, when she arrived at the jail at 5 a.m. this morning. She will spend roughly 35 days under house arrest, according to TMZ.

In addition to her “jail” sentence, Lohan must complete 480 hours of community service — which to her credit she has already started, but must temporarily cease for the next month or so while she has her personal aesthetician come to her house to give her facials and pedicures.

Sounds more like a nice vacation than a punishment.