Unfortunately for American Idol, it turns out Lee DeWyze is the type to hold a grudge. The season nine winner refused to present the American Idol trophy to new victor Scotty McCreery at the finale, and producers are none too pleased. Scandalous! 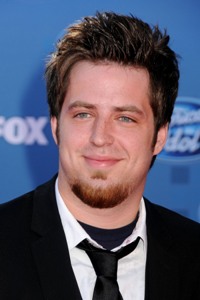 Did Lee DeWyze get cold feet about going on stage at the American Idol finale to hand down the winner’s trophy to Scotty McCreery? Seems unlikely that a guy who did well enough on stage last year to win would suddenly lose his nerve.

During Wednesday night’s season 10 finale, Scotty McCreery was announced the American Idol winner. Yet instead of the previous year’s winner awarding him with the trophy pageant-style, Lee DeWyze remained planted in his seat. Judge Jennifer Lopez stepped in to fulfill the trophy duties due to Lee’s apparent tantrum.

Referring to the Lee DeWyze trophy scandal, executive producer Nigel Lythgoe wrote on his Twitter page Thursday morning, “I was so upset Lee DeWyze wouldn’t present the winners trophy to Scotty. Especially as he’d been on the show this Season. I guess he was shy.”

Looks like there has been some bad blood going on between American Idol and Lee DeWyze for a while now. Contrary to American Idol tradition, the season nine winner was not invited to perform at this year’s finale.

During Wednesday night’s show, Lee DeWyze, who was sitting in the audience, was hardly seen on camera. Is it a coincidence that at one point host Ryan Seacrest stood right in front of Lee DeWyze’s seat while talking, blocking the singer from view?

Looks like Lee DeWyze’s refusing to hand off the trophy to Scotty McCreery is a gesture of his true feelings about American Idol!

What is your take on the Lee DeWyze trophy scandal?