Abigail Breslin isn’t even out of high school yet and she is already making more money in a day than many Americans make in a year. 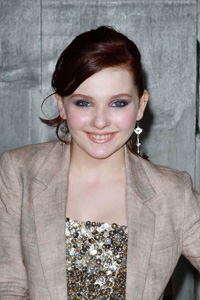 What kind of after-school job did you have when you were a sophomore in high school? Babysitter? Fast food? Mowing lawns? Maybe you were lucky to clear $100 a week, if that. Fifteen-year-old actress Abigail Breslin has a very different job, of course — and a very different salary.

How different? Breslin, who rose to fame in Little Miss Sunshine, made more in one week of filming in March than most Americans pay for their houses!

Get this: Breslin raked in $275,000 for one week of work filming New Year’s Eve — and she’s only in a few scenes! That breaks down to $39,285 per day, which is more than the approximately $35,000 the average American woman working full time makes in an entire year, according to the Census Bureau.

And Rango actress Breslin isn’t done raking in the cash for her week’s worth of work, either. According to TMZ, who got their hands on her contract after it was filed with the LA County Superior Court last week, the young actress will get another $100,000 if box office receipts for the movie exceed $150 million — and if any reshoots are needed she’ll rake in another $39,285 per day.