After 122 million votes came in, Scotty McCreery became your new American Idol. What’s next for the young country singer from North Carolina? The sweet simplicity of chips and SportsCenter.

When Scotty McCreery dropped his head and fought back tears after he was announced the new American Idol we were all wondering what’s next. What’s going on in the brain of a 17-year-old kid who just wiped the floor of the biggest platform he’s ever been on? Well, he cleared a few things up in the press room immediately following his win over friend and fellow contestant Lauren Alaina. 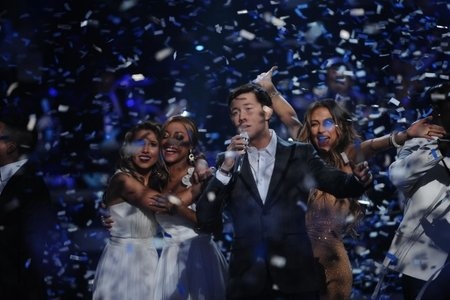 What did he tell reporters he was looking forward to doing now that American Idol is over? “Watching SportsCenter and eating some chips,” McCreery announced. He’s such a funny guy!

He also revealed what kind of Ford car he’ll be choosing for making it to the final two: “F150 Truck.” He’s a pickup man — we like that. He’s not taking his win lightly and knows how much Idol will help his future. “American Idol is a platform and it’s helping us start our jobs,” he said.

As for his partner in crime Lauren Alaina, she said, “I knew Scotty was gonna win. I knew in my heart and I accepted it… I couldn’t pick a more perfect person to get second place to. I know that’s cheesy, but he’s my best friend.”

What do you think of Scotty McCreery’s post-Idol plans to eat chips and watch SportsCenter?