Ryan Reynolds spills his guts about filing for divorce from Scarlett Johansson. His ex-wife-to-be is dating Sean Penn, but he says he’s not ready to date again. 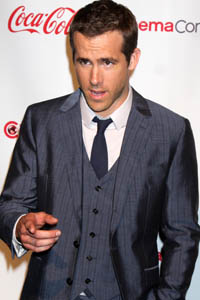 Ryan Reynolds may have ended his relationship with Scarlett Johansson, but as far as playing the field, the actor says he’s not ready yet. In a new interview with Details magazine, the 34-year-old star of The Proposal and this summer’s Green Lantern talks about getting through a celebrity divorce and his trust issues.

“Anyone who gets divorced goes through a lot of pain,” he confesses, “but you come out of it. I’m not out of it yet. At all. But I sense that as I do come through it, there’s optimism. I don’t think I want to get married again, but you always reevaluate these things.”

Even though Johansson, 26, is dating Sean Penn, Reynolds, 34, takes the high road and doesn’t throw his ex-wife under the bus. “There was no story and no scandal, so the narrative was just created for me,” he says.

“I have no interest in dating right now,” Reynolds says, but People‘s Sexiest Man Alive has been spotted with German model Agnes Fisher, 25, who appears alongside Reynolds in Safe House, which he’s shooting in South Africa. “You’ve got walls up in a way you didn’t before,” Reynolds says. “But you’re also open to things in a way you weren’t before.”