Clad with a pristine white piano and signature mic, Steven Tyler wowed the American Idol audience with his classic anthem — Dream On.

Scotty McCreery wasn’t the only winner at Wednesday night’s American Idol finale. Steven Tyler captivated the audience with his classic hit Dream On. 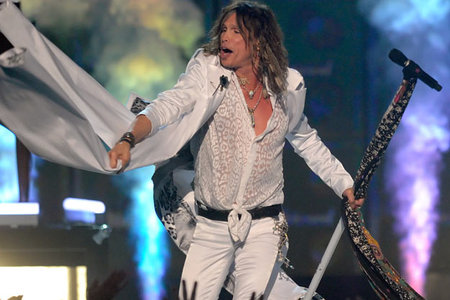 Talk of whether or not Steven Tyler would take the stage with Aerosmith swirled up until the finale itself. Regardless of official confirmation and buzz, fans held out hope they’d show the world how it’s done.

What fans did get was Steven Tyler at his best. Dressed in typical Tyler garb, all in white, the singer sat behind a piano and played the introductory notes to Dream On. When he sang the first few lines it was over — he had us.

Jennifer Lopez was jumping in her seat, Randy Jackson was throwing his hands up and the audience was mesmerized.

When it came time for the crescendo no one can hit like him, Tyler kicked up his leg and whirled that scarf-embellished microphone stand just like he’s done many times before.

We can’t explain exactly how epic his last look into the camera was, so we thought it would be better to show it. Check out Steven Tyler’s stellar performance of Dream On during the American Idol finale. Oh, they gave him the closing spot on the bill of performers (besides the winner) — coincidence? We think not.