Joining a bevy of stars on the American Idol finale stage were Bono and the Edge of U2 performing Rise Above from their Broadway show Spider-Man.

In one of the strangest performances of the night, Bono and the Edge from U2 played the American Idol finale and performed a song from their beleaguered Broadway show Spider-Man — along with show star Reeve Carney — on a stage done up like a giant web. 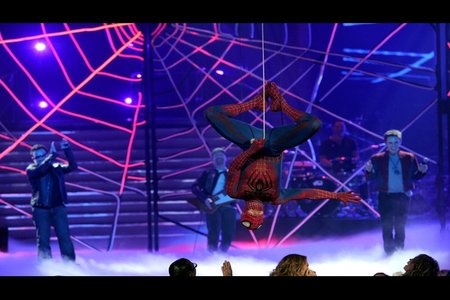 The song seemed lackluster — not Broadway, and if U2 recorded it for one of their albums it wouldn’t be released — and Carney’s facial expressions alternated between intense boredom and nauseated, not the excitement one would expect from the American Idol finale performances.

Regardless, Carney seemed to enjoy himself. Right after his performance he tweeted, “Had the BEST time on Idol. What an honor it is 2 perform w/ your heroes. And even better when ur heroes are the nicest guys on the planet…”

As long as someone had a good time…

Check out the video: