The confetti has fallen and a new American Idol has been crowned. Ladies and gentlemen, your season 10 American Idol is — Scotty McCreery

New judges, online voting and lower age limits were just a few shakeups we had to deal with on American Idol this year, but it was all worth it to see Scotty McCreery take the title. 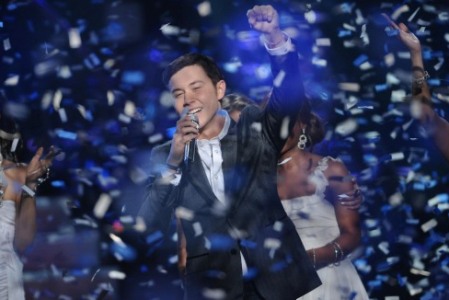 Scotty McCreery and Lauren Alaina, two of the show’s youngest contestants, brought it like seasoned veterans in a country showdown deserving of our record-breaking 122 million votes. How did the crowning moment happen?

First, the top 13 got down with some Born This Way and the acts just kept coming from there. Everyone from Judas Priest and James Durbin to Bono and the Edge showed up to rock the stage. Did we forget to mention Jennifer Lopez’s husband Marc Anthony showed up and she shook her booty on stage with him?

But it was all about the moment of glory — the crowning moment that can spawn a superstar!

When Scotty McCreery’s name was announced as the new American Idol we thought back to the day the judges all wanted us to remember — when they first discovered him.

He could barely sing his new single I Love You This Big, he was so choked up. He did have kind words in regards to Lauren Alaina: “Me and her have been together since day one and we’re gonna stay together.” He’s such a gentleman.

What did you think of Scotty McCreery’s American Idol win?