Khloe Kardashian and the rest of the clan took to Twitter today to congratulate Kim on her engagement! 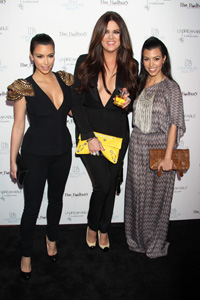 Khloe Kardashian and her sisters congratulated Kim on her engagement to Kris Humphries the new old fashioned way: On Twitter!

“Kimmie I love you so much!!!! I would do anything in the world for you!!! Seeing you this happy in your life makes me smile daily!”

“You deserve this happiness! Get excited baby!!!!! We r about2 celebrate!! 🙂 Kris welcome 2the fam! Just so u know, u married all of us all!”

Sister Kourtney Kardashian was less effusive but no less happy. “My sister is engaged!!! I’m squealing with excitement! The princess has found her prince.”

Even younger sisters Kylie and Kendall got into the act. “Congrats @KimKardashian I love my sissy so much! And I’m SO happy for you on your engagement!!” wrote Kylie, while Kendall tweeted, “Congratulations to my wonderful big sister @KimKardashian on her engagement!!! I love you and I can’t waitt!”

Someone in the family was left out of the loop though. Despite the big moment happening a week ago, stepbrother Brody Jenner didn’t find out about Kim’s engagement until the rest of us did today.

“My sister is engaged? Hahaha I had no idea!!… Crazy being in such a big family… Congrats @Kimkardashian love you. Let’s celebrate soon,” Brody tweeted.

One person silent on the engagement is Kim’s ex, Reggie Bush — but his pals are more than happy to talk about it. In fact, one told HollywoodLife.com that he’s pretty bummed.

“Reggie was told about Kris and Kim’s engagement this past weekend because Kim knew everyone would be contacting him for reaction,” the insider said. “He was apparently made aware of the People magazine cover as well.”

“During their last breakup, Reggie told me Kim may have been the one who got away. He loved her to death.”

You snooze, you lose, boys.

Has Naya Rivera Been Recovered? Body Discovered at Lake Piru