The American Idol performance finale had the most viewers of the night — but still had 7 percent less than last year. Does this mean the beginning of the end for Idol? 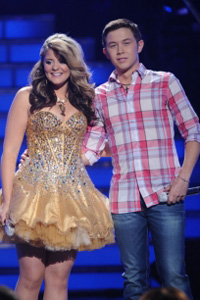 What do all these stats mean? Are people simply not feeling the country theme of this year’s American Idol finale? Or are people over Idol?

American Idol seemed re-energized this year, with new judges including Steven Tyler and Jennifer Lopez but they don’t seem to be drawing the viewers in as expected. After last year’s dismal 6.7 rating (compared to 2008’s 10.1 rating), this year is faring no better with a 6.2 rating.

Glee’s finale drew 12.1 million viewers and Dancing With the Stars’ finale, in which Hines Ward and Kym Johnson won the trophy, brought in big numbers as well.

Tonight’s American Idol finale will pick the winner between Lauren Alaina and Scotty McCreery. Are you planning on tuning in?