The California Attorney General is investigating claims that Arnold Schwarzenegger used state funds to cover up his affairs, but cops say they had nothing to do with it.

The California Attorney General is launching an investigation into whether or not Arnold Schwarzenegger used any state funds to cover up his extramarital affairs while in office as governor of California — but the California Highway Patrol officers on the Sperminator’s protective detail say they had no hand in any of Arnie’s shenanigans. 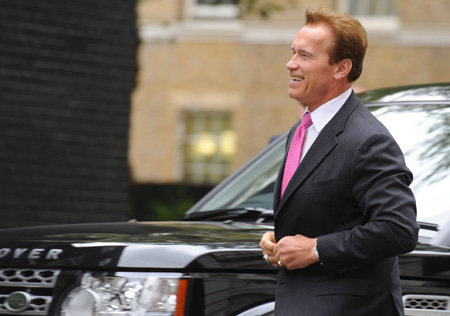 “On three differed occasions after the governor arrived alone at the Hyatt Regency, CHP Dignitary Protection Services arrived in their official vehicles, black Ford Crown Victoria sedans — about one to two hours later with one or two young females,” Taylor told the National Enquirer (we know, we know — but he passed a lie detector test).

“They’d hurriedly escort the women through the service entrance on the second floor parking garage to the elevator that went to the governor’s private wing… The women would usually stay for two to four hours and either leave through the hotel’s main entrance or be driven away by the CHP in the same official vehicles.”

Despite passing that lie detector test with flying colors, Schwarzenegger — through his attorney — and CHP officers on Schwarzenegger’s detail adamantly deny the charges. Retired CHP Sergeant Mark Hammond spent seven years with Arnold and states, “I can say without a shadow of a doubt as a supervisor of his protective detail that at no time did I see Governor Schwarzenegger say or do anything that could be deemed inappropriate.”

“As a supervisor, if anything had occurred, I would have been notified, even if it was technically off the record on his private time.”

Guess it all depends on what certain men deem inappropriate, doesn’t it?

Arnold Schwarzenegger admitted to having a secret love child about a week after he and his wife of 25 years, Maria Shriver, announced their split.

Tell us: Do you believe Schwarzenegger or the security guard?