Justin Bieber was spotted vacationing in Hawaii with his girlfriend Selena Gomez — and showed off his two tattoos!

Justin Bieber took his eight Billboard Awards and his girlfriend Selena Gomez for a little R&R in Maui, Hawaii. Gomez wore a pink bikini top, shorts and carried a printed bag. Bieber, wearing white printed swim trunks and white sunglasses, showed off his two tattoos — a bird on his left hip and a row of symbols under his left arm. 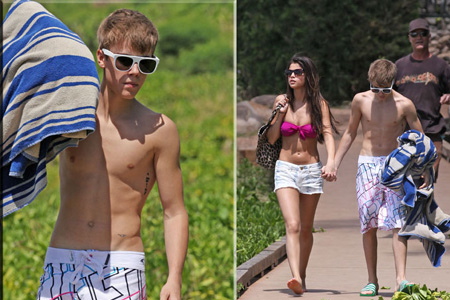 Sources say that the bird tattoo is a family tradition — and his dad was even present when he got the ink in Toronto! Bieber, Miley Cyrus,Vanessa Hudgens and Demi Lovato all have been following the young Hollywood trend of getting tattoos.

Gomez, 18, and Bieber, 17, have been more open about their relationship lately, as they were seen kissing at the Vanity Fair Oscar Party and they kissed at the Billboard Music Awards — although he failed to mention her in any of his acceptance speeches. Oops!

Between the vacations with his girlfriend and the tattoos — Justin Bieber is growing up fast!