It is hard to deny the influence that Kate Middleton (er, Duchess Catherine) has on fashion. The beige Shola bandage dress that she wore to meet the president and Michelle Obama has not only sold out — but the website has crashed from high demand! 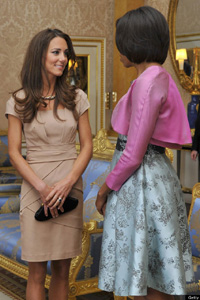 One of the things that is so great about Kate Middleton is that she often wears clothes that are accessible to the general public, such as the beige Shola bandage dress that sells for $350 from Reiss.

Duchess Catherine showed off her slim and tanned bod in the hip dress while meeting President Obama and First Lady Michelle Obama yesterday. As soon as the pictures were made public, women quickly snapped up the dress online causing it to crash their website twice.

“The dress has now sold out online and in the US, with very limited stock left in UK stores,” the store tweeted.

When going to their online site, a message reads: “The Reiss website is currently not available due to unprecedented demand. Thank you for your patience and please accept our apologies.”

On their Facebook page, one person asked if they planned on making more of the Shola dress, saying she was “disappointed” that it was sold out. Reiss responded they have “no plans as yet” to make more of the dress. Bummer!

They do offer some suggestions for Shola substitutes if you missed out on the original. “Missed out on the Shola dress? Don’t panic, we have some rather lovely Shola Substitute dresses still available in-store and on line.” They offer four alternative dresses, however, their website is not yet back up and running to purchase them.

This isn’t the first time Kate’s fashion choices have caused a fashion frenzy. Her blue engagement dress by Issa (which was also available at Reiss) and her royal blue Zara dress that she wore after her wedding both sold out immediately.