Kim Kardashian announced her engagement to Kris Humphries with a People cover prominently featuring her engagement ring. We have the details on the bauble — but who really bought it? 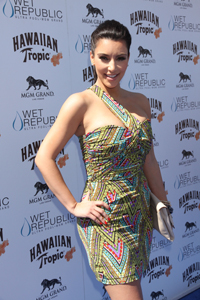 Kim Kardashian is engaged to Kris Humphries, and her engagement ring is nothing to sneeze at. The reality princess is sporting a 20.5 total carat weight sparkler worth $2 million! Created by designer Lorraine Schwartz, the ring features a 16.5-carat emerald cut center stone flanked by a pair of trapezoid diamonds weighing in at two carats each.

Interesting, because that sounds pretty much exactly like one she was spotted wearing on her right hand as far back as 2009, when she was still with Reggie Bush.

So who actually bought Kim Kardashian’s engagement ring? There are several suspects, and none of them are her fiancé Kris Humphries. Dude can’t afford a $2 million ring — he only pulls in $3.2 million a year. That’s a lot more than two months’ salary.

So that leaves two culprits: Kim Kardashian herself, and E! Since the Kardashians pulled in $65 million last year, a $2 million ring is a drop in the bucket — and maybe Kim already had it. It’s also not that far-fetched of an idea that E! and the executive producer of the Kardashian reality TV empire, Ryan Seacrest, kicked in some cash, considering the fact that this marriage gives the network yet another Kardashian reality show spinoff.

You tell us: Who do you think bought Kim Kardashian’s engagement ring?