Filming a music video is a dangerous job, just ask Taylor Swift! The country darling reveals she was forced to hide from tornadoes during the filming of her new video, Story of Us. 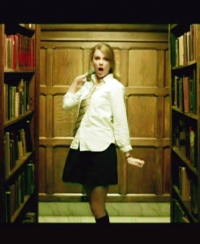 When you watch Taylor Swift’s Story of Us video, keep in mind that outside those library walls a tornado was bearing down! Speaking of filming her new video, the 21-year-old told MTV News, “There were a few complications. This was actually when a bunch of tornadoes were hitting Nashville.”

Taylor Swift continues, “We had to hide. All of us, we had to hide in a room where there were no windows, so that was a little bit crazy. [But] other than that, it was incredibly fun.”

Taylor’s tornado close-call during the Story of Us video shoot inspired her to perform a benefit concert in Nashville. “We were rehearsing and one of my dancers, who is from Alabama, came in and showed us a picture of a cyclone in her backyard and we were just floored.”

Not one to sit idly by, Taylor Swift says, “I just felt, if there was any way that I could help with the damage done and all the families who’ve lost their homes, then I had to think of one. It came to me really quickly that here we are at a rehearsal in an arena where there are empty seats. What if we filled those empty seats and gave all the proceeds to the victims of the tornadoes?”

The $750,000 proceeds from the tornado benefit show were given to assist the area.

Kudos to Taylor Swift for her generosity! Check out the video for Story of Us here: