The brother of Olympic skater Nancy Kerrigan has been found not guilty of manslaughter in the case of their father’s death. However, Mark Kerrigan still faces sentencing for assault and battery against his 70-year-old father. 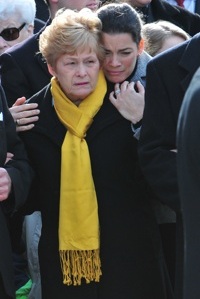 Nancy Kerrigan and her mother Brenda are breathing a huge sigh of relief today after learning Mark has been found not guilty on charges of manslaughter.

Last January, Mark and his 70-year-old father Daniel got into an argument over the use of the telephone. Prosecutors argued during the trial that 46-year-old Mark punched his father so powerfully that he triggered Daniel’s heart failure.

The defense team of Nancy Kerrigan’s brother insisted the prosecution failed to prove its case, and that the family patriarch died of heart disease, which he had suffered from for a long time.

It took a Superior Court jury nearly three days to declare Mark not guilty of manslaughter. Speaking of the verdict, People quotes Nancy Kerrigan as saying, “My family has never believed that my brother had anything to do at all with my father’s death, and my dad never would have wanted any of this.”

Nancy Kerrigan’s brother Mark now faces sentencing on Thursday for assault and battery against his late father. He could receive up to two-and-a-half years in jail.

Brenda and Nancy Kerrigan have stood by Mark’s side from the beginning. Last year, they said in a statement, “The Kerrigan family does not blame anyone for the unfortunate death of Dan Kerrigan, who had a pre-existing heart condition.”