Oprah Winfrey kept her final show simple, with an audience made up of loyal fans and a few stars. 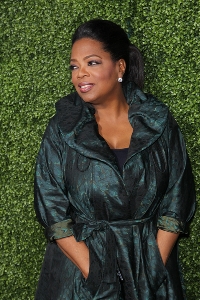 As Oprah Winfrey ushered out her 25-year reign on The Oprah Winfrey Show, she kept her audience simple as to not take away from the goodbye moments of the show. The show wasn’t about hype and surprises.

Many of the audience members who were lucky enough to grab their tissues and head to Chicago for the final taping were loyal fans who shed many tears over the queen of talk’s exit. A majority of them found out they’d be seated in the finale’s epic taping over the weekend — right before its Tuesday taping.

Audience member Wanda Nash told the Chicago Tribune, “When she came out, her appearance, the way she stepped on stage and the message she brought about finding yourself, your purpose, it was all about Oprah.”

A few stars speckled the audience including Tyler Perry, Maria Shriver, Suze Orman and Cicely Tyson, but not a single one stole the spotlight from the intimate moment Oprah Winfrey was trying to have with everyone else.

As she said goodbye, Oprah Winfrey took her last walk up the aisle and through the audience, hugging a few fans as she made her way to Stedman Graham. The couple shared a simple kiss, before Oprah hugged her beloved pooch Sadie, shouting, “We did it, Sadie.”

What did you think of the simple audience Oprah Winfrey chose?

35 mins ago
by Reshma Gopaldas