Since Oprah Winfrey announced this would be the final season of her iconic talk show, everyone has been trying to figure out who the guest on her final show would be. Now we know — and SheKnows is telling you! 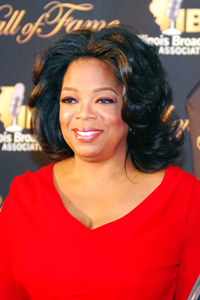 Who is Oprah Winfrey‘s last guest? It isn’t her BFF Gayle, or her secret sister, or the guests whose careers she’s launched like Dr. Phil, Nate Berkus and Dr. Oz.

The show was simple, just a chair, Oprah and her audience. Calling her show “the great love of my life,” Oprah imparted words of wisdom to her fans, explaining that her success can be our success if we become more self-aware, believe in ourselves and listen to what the universe is telling us.

Some choice pieces of Oprah wisdom:

“You have a platform. You have the power to change someone’s life. Everyone has the power.”

“Start embracing the life that is calling you.”

“It was just her the whole time, a recap of what she believed in, what we’ve given her as viewers and what she hopes she has given us,” audience member Nancy Evankoe told the Chicago Tribune.

While there were celebrities in attendance — Tyler Perry, Maria Shriver, Suze Orman and Cicely Tyson were all spotted in the audience — none joined Oprah on stage.

In the end, it was just Oprah and her audience — exactly how she always wanted it to be.