With a single chair and the audience by her side, Oprah Winfrey ushered out 25 years of greatness in a finale she took back to basics.

After 25 years of evolving hair, changing styles and impacting our lives, Oprah Winfrey has said goodbye to The Oprah Winfrey Show. 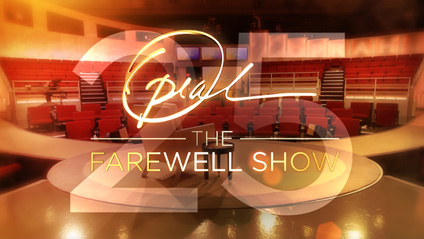 With her staple comfy chair and audience, Oprah Winfrey ended her beloved platform in the same way she began — with simplicity. There were no guests, fancy makeovers or giant surprises. She opened her final show doing what she does best — speaking from her heart. “There are no words to match this moment,” the talk show host emotionally told her audience.

Winfrey added, “How truly amazing it is, this journey you and I shared together.” This was the theme for the final show that has changed our lives for the better — Oprah and her audience and what we’ve learned.

She spent the hour sharing tweets from her beloved viewers who were touched by the show over the past 25 years as well as reminding us to live the best life we can. “Start embracing the life that is calling you,” she advised everyone watching.

She reminisced over the moments that have touched not only her life but ours. From stories on alcoholism to the courageous men who stood up to molestation, the talk show host spoke of her need to make her show a safe place. One of the proudest moments for her was when Tyler Perry gave his own testimony about surviving sexual abuse, making it okay for 200 other courageous male abuse survivors to “stand up for the little boy inside,” right in her studio audience.

If you’d like to keep in touch with Winfrey you can do so by simply sending your thoughts to Oprah@oprah.com. She wants to keep the dialogue going — that’s how much we’ve touched her.

It was a fitting way to end the queen of talk’s 25-year reign. She began with folding chairs and her staff as an audience and left as a role model for millions. Tearfully, she told everyone watching that the show has been “the great love of my life.”

As we lose a show that in so many ways will be a part of us forever, there’s one last question to ask that Oprah Winfrey has been asking us to answer for years: “Your life is speaking to you. What is it saying?”

We’ll leave you with Oprah Winfrey’s parting words: “I thank you all for your support and trust in me. I thank you for sharing this yellow brick road of destiny. I thank you for being as much of a sweet inspiration for me as I tried to be for you. I won’t say goodbye. I’ll just say, until we meet again.”