The rich and famous are waiting on edge just like the rest of us to find out who will be crowned this year’s American Idol! Take a look and see who has joined up with Team Lauren, who is casting their vote for Team Scotty, and who is still sitting on the fence. 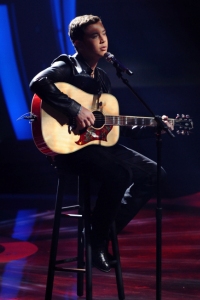 Not since the epic battle of Team Edward versus Team Jacob has the public been so divided between two choices. Who will be named as this year’s American Idol? The answer varies depending on which celebrity you talk to.

Before Tuesday’s finale performance even concluded, Alyssa Milano had made up her mind. The pregnant actress tweeted to her 1.6 million followers, “Lauren. That is all. #AmericanIdol”

Songstress Jewel told USA Today she worries for the young American Idol contestants. “I worry about Scotty,” Jewel shared in a phone chat. “I know quite a few guys that have that deep, cool voice right now that happen to already be in the genre and working right now. Just need to see if they can find a niche for him.”

“The same could be said of (Lauren),” Jewel continues. “There are some girls (in the industry) with some great strong vocals. It just comes down to what kind of management they have and what kind of vision they see for themselves as artists — and how able they are to execute that. As we’ve seen, a lot can go wrong after winning. It’s tough. It takes a lot more than just being a great singer to become a celebrity and a star and to have a good career.”

Nigel Lythgoe, the executive producer of American Idol who staunchly insists the voting isn’t rigged, remained diplomatic about siding with one teen over the other. When the LA Times asked him who will win on Tuesday he replied simply, it will be “the one with the most votes.”

Also sitting on the fence is Marc Anthony, husband of American Idol judge Jennifer Lopez. He tells Zap2it, “We have all seen it can go any way. I will reserve the right — I won’t comment on who I want. What I will say is the stable of talent this year is like none I have ever seen. That is a testament to the new process.”

Don Was, the music mastermind who worked with contestants during this season, says it’s impossible to predict who will win — but if you read between the lines he seems to be a Scotty McCreery fan. “Everyone understands that this is a dream contest looking for the best singer,” Was says. “But I think it’s pretty clear that you don’t have to win to launch a career. I think a guy like Scotty, he’ll be around for 40 years.”

We spoke with Entertainment Tonight co-anchor Nancy O’Dell, out promoting her work with the Hershey Center for Health & Nutrition’s Moderation Nation campaign, on Tuesday. When it comes to American Idol the showbiz expert is decidedly team Lauren!

Nancy, who is still mourning the voting off of Pia Toscano, says, “I’ve liked Lauren from the very beginning. I remember her so well from her tryouts. Both of them have an amazing voice for being that young.”

Time for you to weigh in — will Scotty McCreery or Lauren Alaina be getting your American Idol finale vote?

WE’RE ALL OVER AMERICAN IDOL: