Season seven American Idol winner David Cook performed a cover of the 1985 song by Simple Minds, Don’t You (Forget About Me). If the song sounds familiar to AI fans, it is because this was also the song that played after contestants were voted off. 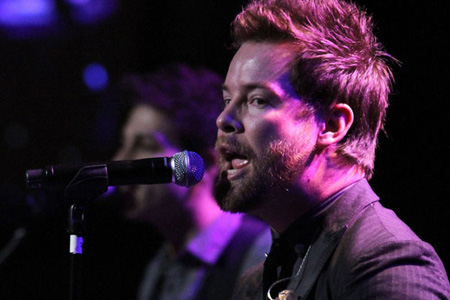 As Cook performed with his band, a video of American Idol clips from the season flashed behind him, showing both happy (Casey Abrams kissing JLo) and sad moments.

What has Cook been up to since his win in 2008? His first single The Time of My Life was a hit, debuting at number three on the Billboard charts. He had a tragedy in his personal life, as his older brother Adam died of brain cancer in 2009. He sang the song Permanent on the finale of season eight of American Idol in honor of his brother.

His new album, This Loud Morning, will drop on June 28 with his first single being The Last Goodbye. The video for The Last Goodbye has dropped — and it was directed by Nigel Dick, who has worked with Britney Spears.

Check out the video of The Last Goodbye by David Cook here: