Taio Cruz performed a song on tonight’s American Idol called Positive — and it was written by fans! 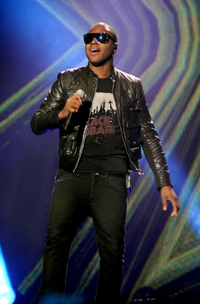 Taio Cruz performed a new song on Tuesday’s American Idol that was written by fans of the show. Fans submitted their own lyrics online and American Idol picked the best ones and put the lyrics up for a vote.

Taio Cruz put those lyrics that had the most votes into his new song. Pretty cool, huh?

“It’s been really great. We’ve had some great submissions,” he said.

The British singer, who is famous for his song Dynamite, performed the song with flashing green lights and robot-like dancers playing the drums behind him. He did seem to have some technical difficulties at one point, losing sound on the microphone — but he kept going and it was only a minor glitch.

Who does Cruz think will win American Idol? He’s keeping with the theme of his song — and staying positive. “I think it’s anyone’s game. I don’t wanna jinx anyone,” he says. “I think everyone’s very deserving of being the winner so I’m gonna keep it like that.”