The race for the mirror ball trophy was finally decided on the Dancing With the Stars results show, as Hines Ward was crowned the new champion. 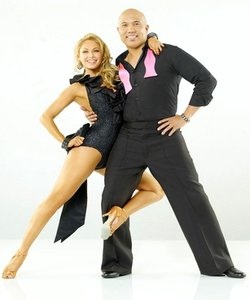 Another season of Dancing With the Stars has come and gone. With that brings a new mirror ball trophy champion — Hines Ward.

Before he was crowned champion there was fun to be had. It wouldn’t be a Dancing With the Stars finale results show without electric acts like the Black Eyed Peas and the return of booted dancers like Mike Catherwood, Kendra Wilkinson and Petra Nemcova.

Nemcova performed a beautiful waltz to Raise Me Up and got a special surprise — Josh Groban. He flew in just to surprise her! It was a Kodak moment as she genuinely looked shocked.

Okay, that was all fine and dandy but there were results to be dealt out.

How did it all go down? Well, Hines Ward and Chelsea Kane went into the results show tied at the top of the leader board with Kirstie Alley trailing slightly behind. They had one dance left, leaving it up to the judges to impact their scores from Monday night.

All the couples had to perform their favorite from the season. It was the night of perfect scores — all of them got a 30.

Chelsea Kane and Mark Ballas flawlessly danced the Harry Potter-esque Viennese waltz from earlier in the season, while Kirstie Alley and Maks Chmerkovskiy reprised their cha cha cha from week one. Our pick — Hines Ward and Kym Johnson — took on their hot samba.

The first couple eliminated was Chelsea Kane and Mark Ballas, coming in third place. It was a true shock to see them not come in at least in second place.

What did you think of this season of Dancing With the Stars?