Oh, the drama! Just hours before the American Idol finale kicked off, news broke that contestant Lauren Alaina had lost her voice. Just in the nick of time she pulled through and showed up on stage for the celebrity mentors to choose songs for her and competitor Scotty McCreery.

Country stars George Strait and Carrie Underwood had the honor of selecting songs for the final two American Idol contestants. One of the country superstars chose a song by another artist, while the other opted for a piece of their own work. 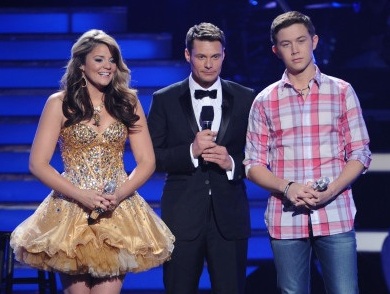 Lauren Alaina, who played down her earlier vocal cord scare, had superstar Carrie Underwood selecting her song. The American Idol alum chose the Pam Tillis classic Maybe It Was Memphis. Overall, Lauren’s performance of the 1991 hit is being received as good, but safe — and perhaps not stunning enough for the final showdown.

George Strait did the picking honors for Scotty McCreery, selecting a song of his own for the 17-year-old to sing. Check Yes or No seemed a natural fit for the young crooner, who had the crowd in the palm of his hand. Bonus points to Scotty for accompanying his voice with his own guitar work!

What do you think of the songs chosen by the celebrity idols? How about Lauren Alaina and Scotty McCreery’s American Idol finale performances?

GET YOUR IDOL FIX HERE: