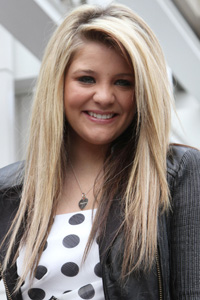 American Idol finalist Lauren Alaina lost her voice at rehearsals today, barely getting through two of her three songs. Haley Reinhart was brought in to sub just in case — but it looks like the feisty singer isn’t needed after all.

A doctor was brought in to the American Idol set to tend to Lauren’s broken pipes.

According to TMZ, the doc said Lauren “blew out her vocal cords” but he gave her a bunch of meds and “she’ll do great.”

Here’s the deal. Professional singers unfortunately lose their voices with some frequency, but the show must go on. A couple of cortisone shots to the vocal cords and you’re good as new! We’re not sure that’s what the doc did to Lauren, but it’s standard procedure in a case like hers.