Supermodel Claudia Schiffer showed up on the red carpet at Cannes looking extremely skinny. She used to say models were too skinny. Now she’s stick thin. 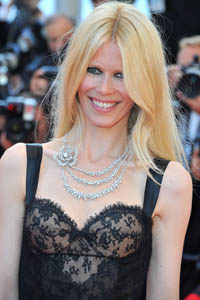 Once famous for her curves, supermodel and former Guess model Claudia Schiffer walked the red carpet at this year’s Cannes Film Festival and set tongues wagging with her bony frame. “Curveless in Cannes” announced one headline about the bony model. Is this a case of a celebrity dropping too much of her post-baby weight too fast?

The 5-foot-11, 40-year-old blonde from Germany appeared to be as stick thin as any young model working the runway today. Her shoulder bones and collarbones protruded in a body-baring Dolce & Gabbana black lace gown as she made her way to a screening of This Must Be the Place, starring Sean Penn and Frances McDormand.

Schiffer, a mother of three, gave birth to her youngest child a year ago, and with headlines promoting how much weight celebrities have lost after having a baby, it’s possible the model felt some of the pressure to lose it all fast.

“Before my pregnancies, I was someone who had to watch their weight,” she told Vogue of her diet. “I had a personal trainer, I was working out, I would never eat anything sweet. Anyway, I got pregnant and when I was breastfeeding it just came off. I can eat whatever I want. If I don’t eat enough, I will lose weight.”

In 2006, she spoke critically of the fashion industry’s pressure on models to be impossibly thin.

“Fashion looks good on thin models, but when you look at today’s models you cannot help but think there’s something wrong,” she said. “They are way too thin. It is only bones that stick out. Models have always been thin, but today, they are even thinner, which is unbelievable.”