Who better to weigh in on tonight’s Dancing With the Stars finale than a former contestant? Nancy O’Dell, the new co-anchor of Entertainment Tonight, spoke with SheKnows this afternoon about who she thinks will be victorious, and if another try at Dancing is in her future. 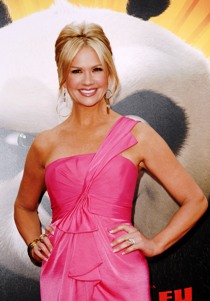 Nancy O’Dell’s dream of competing on the eighth season of Dancing With the Stars was cut short by a knee injury in the early weeks of training. Now that she’s back on her feet, the new co-host of Entertainment Tonight and spokesperson for the Hershey Center for Health & Nutrition’s Moderation Nation campaign is weighing in on who will take home the mirror ball trophy tonight!

When asked if she would consider going for Dancing With the Stars again, Nancy told SheKnows that concerns for her knee outweigh her desire to give it a try. “You know, I had to have surgery on my knee, so I always think, ‘Oh my God, what if I got injured again?’ That would be really embarrassing if I had to pull out again.”

Nancy continued, “And I’m a little afraid. My meniscus was shredded in my knee, which isn’t a corrective surgery they can do. They have to remove the torn tissue because it can catch on your knee. I think, ‘Gosh, what if it happened again and they had to remove more?'”

“It’d be fun to try it again but I don’t know,” Nancy added. “There’s a lot of injuries these days!”

Nancy O’Dell’s prediction for the Dancing With the Stars winner? She says, “I think it’s going to be Hines Ward. I was going to say Kirstie, she has a big fan base and a lot of people pulling for her, but I think Hines is the best dancer in the group.”

Thanks to Nancy O’Dell for chatting with us. We’ll find out tonight if her Dancing With the Stars winner prediction is correct!