Model/actress Estella Warren was arrested on DUI charges after slamming into three cars, kicking a police officer and escaping from jail! 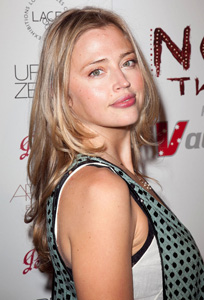 Estella Warren went nuts Mel Gibson-style last night when cops pulled her over after witnessing a hit-and-run accident with the model behind the wheel.

Cops say just after midnight Warren slammed into three parked cars in her Prius then drove away. Police followed her and quickly pulled her over — but when they tried to arrest her she pitched a fit, going so far as to kick an officer!

And it gets better: At the station Warren somehow managed to slip out of the handcuffs and ran out the back door of the jail! Luckily this criminal offender was quickly recaptured.

As a law enforcement source told TMZ, “She was really hammered.”

Read on for more celebrity DUIs on SheKnows

Warren was booked for assault, hit and run, DUI and felony escape — not too shabby for a Monday night. Her bail is set at $100,000.

Oh, and another interesting tidbit brought to light by RadarOnline: Although Estella Warren’s IMDB page lists her age as 32, the model/actress’ booking papers say she’s 40.