Surprised to hear musician Lenny Kravitz has been cast for a role in The Hunger Games? Us too. Though he is a fairly stylish fellow… 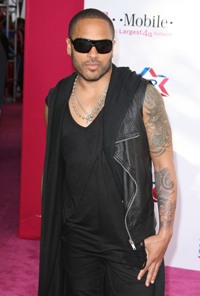 Lenny Kravitz has signed on as part of The Hunger Games cast as the kind-hearted stylist Cinna!

The film’s director Gary Ross spoke to MTV about his decision to cast Lenny Kravitz in The Hunger Games, a move which may surprise fans of the novels. “When I saw Lenny’s work in Precious, I was just knocked out,” Ross said. “It was quiet and strong and understated and openhearted, all qualities which define this character. I’m really looking forward to this ride.”

The character Cinna is the stylist for District 12 tributes Katniss (to be played by Jennifer Lawrence) and Gale (to be played by Liam Hemsworth). Lenny Kravitz will be in good company during The Hunger Games filming. Elizabeth Banks has signed on to play Effie Trinket, Woody Harrelson will portray the drunken Haymitch Abernathy and Josh Hutcherson will star as Peeta Mellark.

In Lenny Kravitz’s The Hunger Games role as the stylist Cinna, he’ll be responsible for presenting the tributes in complex costumes and ensembles that reflect the characters’ home districts. Cinna, whose first year as stylist is the same year Katniss competes, is one of the few calming presences in Katniss’ life and one of the few people she can trust.

What do you think of the casting of Lenny Kravitz as Cinna in The Hunger Games?