Part two of Surprise, Oprah! A Farewell Spectacular aired with a new set of famous faces paying tribute to Oprah Winfrey including Will Smith and Jada Pinkett Smith. Read on to see the exact moment we finally got to see Oprah Winfrey do the ugly cry. It was pretty special.

It’s been fun matching the televised moments ofSurprise, Oprah! A Farewell Spectacular with the buzz we heard following the taping. We already gave you the skinny on part one and now it’s on to part two. You don’t want to miss finding out the exact moment Oprah Winfrey broke out the ugly cry. 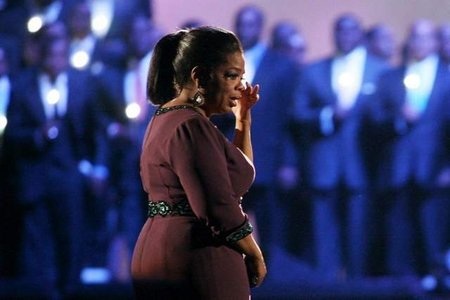 Remember that old saying, “Second verse same as the first?” It pretty much applies to the second part of the Surprise, Oprah! A Farewell Spectacular extravaganza. The point and theme didn’t change, only the famous faces did. Okay, we lied. The tempo was much more upbeat than part one — aside from the ugly cry we so longingly wanted. On with the show!

She said it best in the opening of part two: “We’re still here.” That we are, Oprah, that we are. We stayed glued to our televisions to watch Will Smith and Jada Pinkett Smith honor their friend. “I know you don’t have children of your own, but you have mothered millions,” Pinkett Smith told Winfrey.

Now, this moment was pretty cool. If you’re from Chicago, like someone from SheKnows is, you’ll understand why. Michael Jordan showed up! This man built the United Center name and took Chicago by storm when he came on the scene in 1984 — just like Oprah Winfrey did. “You need a job, I got one for you,” he told the woman of the hour. Not quite an ugly cry moment, but we’re getting there.

Simon Cowell, Rosie O’Donnell, Dr. Phil, Jerry Seinfeld and a stampede of other celebrities rotated through the hour paying homage to Oprah Winfrey, but it was the second half of the show that really kicked the reality that she’s leaving into high gear.

We saw the pictures of Gayle King and Maria Shriver hugging their friend and heard all the chatter surrounding Shriver’s appearance and we have to say — her appearance was astonishing. She looked beautiful and thanked Oprah for the “truth.”

The moment we’ve all been waiting for! Kristin Chenoweth is the winner of getting Oprah Winfrey to ugly cry! All kidding aside, the moment was beautiful. Chenoweth tailored the Broadway song from Wicked, For Good, to fit the moment, as a bevy of Morehouse College graduates Oprah inspired surrounded her with candles. She blubbered through the beginning but pulled it together at the end. It was truly an Oprah Winfrey moment.

Stedman Graham helped close the show in a moment we rarely get to see. “It amazes me that I get to be around a woman who changes people’s lives every day and still takes her lunch to work.” He added, “I love you for making a difference in my life,” before introducing Aretha Franklin to blow the roof off of the party. Oh, we have to mention Usher stormed the stage to help sing out the show with Franklin. They got their Oh, Happy Day on!

Are you going to miss Oprah Winfrey? Tell us your favorite “O” moments.