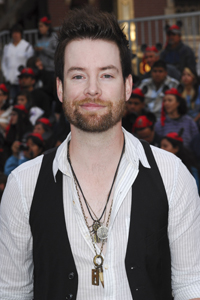 One of American Idol’s most popular champs, David Cook, is about to hit the music scene again with a new album and new single.

Cook’s new album, This Loud Morning, is set for release on June 26. The lead single off his sophomore effort is The Last Goodbye — and now the video is set to officially premiere during American Idol’s two-night finale!

Don’t worry, Word Nerds — you don’t have to wait until Idol to see the music video. We did some major investigation (i.e. a Google search) and found the leaked video online.

So how does death play into the whole thing?

Well, it’s actually pretty funny. The video revolves around Cook’s visit to the beach to write a few songs and get over the loss of his girl. The silly guy is so distraught that he manages to drop his wallet and leave all of his belongings on the beach, along with a notebook that has The Last Goodbye scribbled on it. A well-intentioned passerby sees that and assumes Cook met his fate in the water.

Meanwhile, Cook goes back to his hotel where his bandmates bring him a newspaper with the story of his demise.

“Every time I hear that song I think of Judd Nelson on the football field with his fist in the air,” Cook told The Hollywood Reporter last month. “I’m extremely happy with the end result. It was a huge honor.”

Are you excited for David Cook’s new album?