American Idol positions itself as a family-friendly show, but it’s not without its fair share of scandal. Here are five of the biggest. 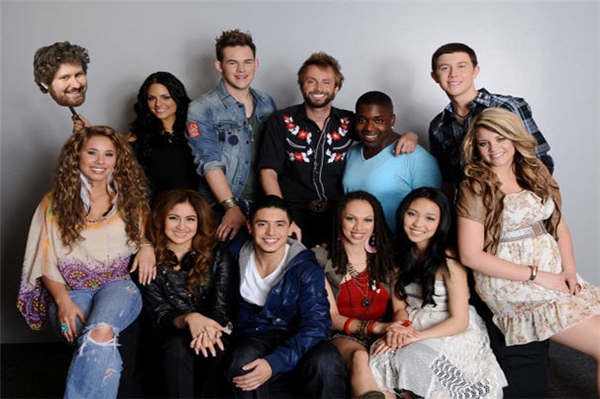 This season of American Idol has been pretty drama free, save for Steven Tyler’s sometimes-creepy comments and possibly the snub of former winner Lee DeWyze. However, there’s usually ‘that guy’ or ‘that girl’ who brings the drama to the family show.

Check out five of the most scandalous American Idol moments ever.

Pretty Joanna Pacitti was thought to be a shoo-in for a top spot on the show during season eight. However, her quest for Idol gold was cut short in the top 36 when producers discovered she had a relationship with a couple of staffers.

Singer Frenchie Davis stole the show during her season two audition with her big voice and even bigger personality. However, Davis was later kicked out after topless modeling photos appeared.

Davis eventually found success — and a Grammy nomination — with her roles in the touring Broadway shows Ain’t Misbehavin’ and Dreamgirls. Oh, and now she’s competing on another reality competition — NBC’s smash success The Voice.

Antonella Barba seemed better suited for the Jersey Shore than American Idol when several racy pics emerged around the time she was advancing on the Idol season six circuit. The real scandal wasn’t the photo leak — it was that Barba wasn’t kicked off for the photos like Frenchie Davis was before her. She made it to the top 16 before she was eliminated.

Latin cutie Mario Vazquez was one of the favorites to win season six of American Idol when he abruptly pulled out of the competition. The reason? Idol producer Magdaleno Olmos claimed that Vazquez made advances at him — and even stared at him through a bathroom stall door.

“Vazquez stared lasciviously, smiled lasciviously and on one occasion followed him into a bathroom… knocked on the door of the plaintiff’s stall and made eye contact through the space in the stall door,” Olmos’ lawyer wrote in his sexual harassment lawsuit.

Vazquez went on to get a record deal and achieved moderate success with his single Gallery in 2007.

Corey Clark was disqualified from the second season of American Idol after he claimed that he had a sexual relationship with then-judge Paula Abdul. Clark claimed that Abdul advised him on how to dress and act on the show — a claim she denied.

“There was love there. It was a relationship for like three, four months. She told me she loved me. I told her I love her. Do I still love her? No. I’ve moved on. Do I love her as a person? Yes. Do I care about her? Yes,” Clark told ABC’s Primetime in 2005. Abdul was investigated and cleared of any wrongdoing by Idol execs.

What do you think is the most scandalous moment in Idol history?