Part one of the American Idol finale goes live in a matter of hours and there are still a few things we don’t know. Here at SheKnows we thought it might be more fun to focus on what we do know in the last hours before the final two hit the stage. 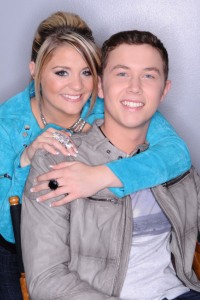 American Idol is set to kick off its two part finale and while we don’t know all the details, the ones we do know are quite interesting! Here are a few tidbits as we eagerly await the showdown between Scotty McCreery and Lauren Alaina.

First, we found out last week that Scotty McCreery did the gentlemanly thing and allowed Lauren Alaina to choose her singing position. She chose wisely — second. This puts her in the prime spot to hit the audience with that killer “remember me” performance.

That brings us to the other thing we know for sure — the theme of the finale. During the performance night we know the country twang is going to be flying left and right from the contestants’ mouths. It will be interesting to see their song selections and how diverse they make their sets.

It’s also been confirmed the contestants will get a chance to wow the voting public with three songs each.

As for part two of the finale, we know lots of big names are tapped to perform. A little birdie flying around told us Steven Tyler (minus Aerosmith), U2’s Bono and the Edge, as well as the top 13 are set to take the stage on Wednesday night’s results show.

Speaking of Idol hopefuls from the top 13 who got the boot, Casey Abrams will be performing with Jack Black — how about them apples?

There you have it. It’s going to be a three-song, country-loving, U2-rocking, top 13-returning American Idol finale.